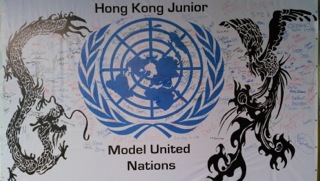 The Victoria Shanghai Academy (VSA) Junior Model United Nations conference was an amazing, educational experience. The conference helped me to learn a lot about world issues and it was a great starting point for a new Jr MUN student such as myself. This was my first conference and it really helped me to see a new side of debating. The atmosphere in the conference was very professional and it gave me a glimpse of how a real UN Delegation representative would feel.

We came well prepared with an opening speech and a position paper for two different topics. When we first arrived we heard a performance from the VSA girls choir singing ‘Sky Fall’. Soon after that we heard two speeches: one about refugees and another about organic agriculture. Then we were given our timetable and we were shipped off to our debate rooms. Each delegation presented their opening speech and we began with the unmoderated caucus or the resolution. It was the main submitters job to present it, and soon after that we started our second topic. On day two we finished our resolution and presented. We then went to the General Assembly for an emergency topic. Lastly the awards were presented. Jr MUN gave meaning to our weekend.

The conference was really good and it went smoothly. We had a chance to debate on problems around the world and we were placed on different committees to debate on different issues: Child labor, Market Access etc. In each committee, we were able to give our opening speech and create resolutions to help solve the issues. There were so many good resolutions; some of them passed and some others didn’t. I was able create a resolution with delegates representing other countries and make speeches for or against resolutions. This was an opportunity that was really fun and I learned a lot from this experience.