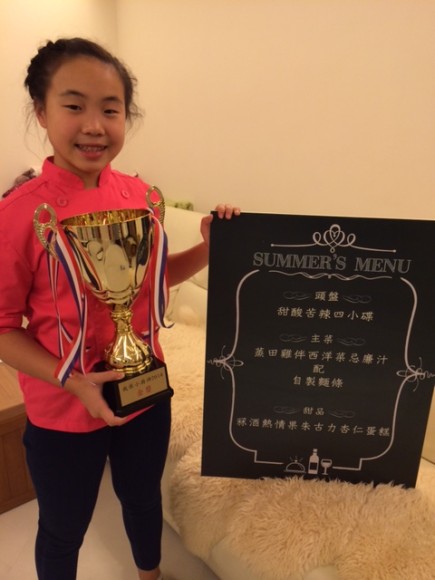 We would like to celebrate the success of Summer Chiu, Year 8, in a television cooking competition held last term. Here is Summer’s brief explanation of what was involved:

“Recently, I have participated in a cooking competition on Hong Kong’s Local TV (TVB) called Chef Minor (我係小廚神). In the cooking competition, there were in total 60 people trying out to be in the TV show! At first I was certain I wouldn’t make it as it was choosing 30 out of 60, but unexpectedly I got chosen to be in it! In the TV show, there were 5 episodes. In each episode, there was a theme and you had to cook accordingly to that theme.

Little by little, I was progressing into the competition that I have never thought of coming to that far. So finally at the fourth episode, when they had to choose 2 out of 7 for the Finale, I was chosen!

After the judges tried our dishes, they announced that both our dishes were great but the other contestant messed up some parts of her main course and appetizer. So they announced I was the winner! They said my dishes were creative, consisted a lot of techniques and were high quality! I felt so amazing that I have achieved something I would never thought of doing. I will continue to cook and bake for everyone and to reach my dreams as a food scientist.”