On Wednesday 17 June, students from Y6-8 who participated in the LEGO Robotics CCA Science Week Activity, a cross curricular venture run by Mr Alan Forster in Science and Mr Danny Freer in Design, held a competition to see who had designed and built the best robot. Two robots challenged each other to see which could push the other off a wooden platform (representing a sumo wrestling ring). The winners then challenged each other in a winner stays on tournament. The robots were created from Lego Robotics EV3 sets and incorporated motors and sensors to detect the platform edge and various weaponry to defeat their opposition. All of the robots had been programmed and built by the students.

Amid much excitement and cheering, the ultimate winners were finally decided. Wheels were lost, weaponry broke and robots fought each other to stay on the platform.

All 27 participants in the CCA this year and the 5 student mentors have shown amazing dedication and teamwork to get to this stage. 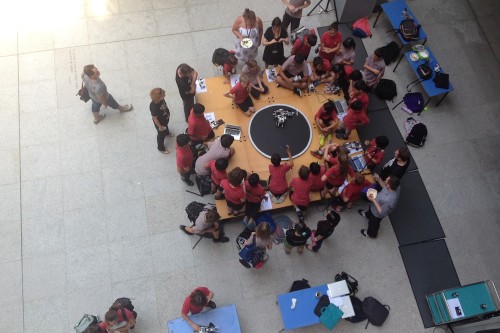