Day one was a great success for our Cobras Girls team, winning all of their games convincingly. The Cobras Boys team won 1 from 3 but played with determination. On day two our girls team continued their winning ways with the girls rallying around Emily Choi who served out a whole set against ISD with the DC Cobras Girls winning the set 25-0. This win, along with their other dominating performances saw the girls team place first in the girls division. The boys team had a more productive day moving back to a 4:2 rotation winning 2 from 3 games to place 4th in the boys division.

Finals day saw the return of Danny Choi from the ACAMIS Golf Tournament to assist his captain and only survivor from pool play Patrick Hawkey. With the departure of the rest of the team to No Boundaries we rallied a ‘motley’ crew of U16 players and Nastia Kosachevskya who took one set off YCIS HK and pushed them in the third set to lose narrowly. The girls had a deserved late start with their final at 3.00pm. They started a bit flat but pushed through to win the final in two sets, bringing home the ACAMIS Girls Volleyball Champions banner for a second consecutive year.

A big thank you to all involved in this tournament including the DC community who lifted our teams on the court with cheers and claps of support. 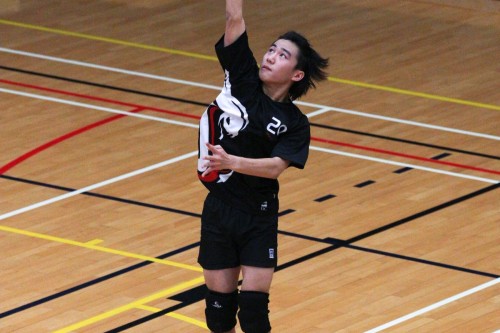