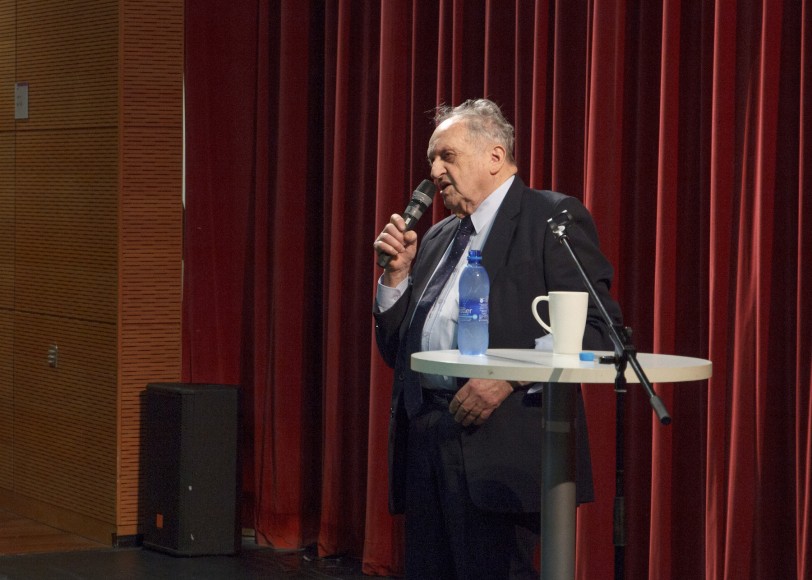 At the age of 15 Dov Landau, living in Brzesko, Poland, was sent into forced labour under the occupying Nazi forces.  The synagogues of his town were burned and there was increasing violence towards the town’s significant Jewish population, who had been settled in the area for many generations.  His mother and four siblings were taken away on an enforced transportation, never to return.  Dov and his father were forced into a ghetto where living conditions deteriorated.

In 1943 he was transferred first to the Szebnie labour camp and then to Birkenau, (part of the Auschwitz-Birkenau complex, the largest of the Nazi concentration camps). It was here that he saw his father for the last time. Dov recounts the final moment with his father in which his father urged him to remain faithful to Jewish traditions in the hope that he would survive. Dov then endured a death march in which thousands of fellow prisoners died from cold, disease, hunger and brutality.  He was taken to the Buchenwald camp which was liberated by American forces 11 April 1945. Dov was the sole surviving member of a large extended family.

His experiences in the war and his emigration to Israel were depicted in Leon Uris’ famous novel ‘Exodus’ which was also made into a film. He returns to Poland each year to lead tours around Birkenau. Dov’s powerful testimony and remarkable story of survival was shared with Y9 students who are studying Holocaust literature, DP History students and visiting students from DBIS. His visit was organised in conjuction with the HK Holocaust and Tolerance Centre.