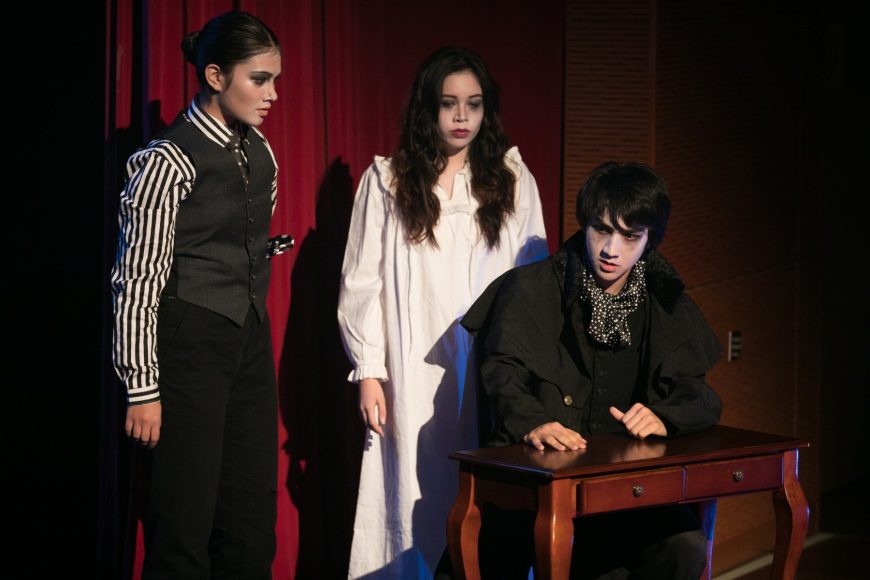 This week premiered Nightfall with Edgar Allan Poe, the 2017-18 annual Secondary production at DC. Four dark and mysterious tales of murder, paranormal, torture and insanity lit the stage with elements of comedy and satire, and scared the audiences with screams and shivers of delight.

Over several months, the cast and crew have worked tirelessly, building sets, sewing costumes, rehearsing scenes, and designing lights and sound, giving up much of their free time to plan, build and create this production, and the results were amazing.

On Monday the 27 November, the Y6 Primary students were treated to a full dress rehearsal performance. There were squeals of fear and gasps of fright during the performance. The audience feedback received included, “I liked the play a lot because it was mysterious and spooky,” and “I liked the violence and the acting was amazing. The facial expressions when they got shocked and surprised were great.”  We hope they enjoyed the performance and didn’t suffer from any nightmares afterwards!

Tuesday’s premier performance and the second show on Wednesday night were both smash hits, and once again the theatre was filled with an appreciative audience. This time most of them were adults. The comedic moments in the plays were recognised with laughs, while the horror scenes were tolerated with gripped knuckles and celebrated with rousing applause after each tale was told.

As one of the directors for this show, I can only extol the cast and crew for their amazing work on this production to make a script come to life, shimmer on stage and crash onto the audience in the style of The House of Usher. It is a great performance, worth every minute put into it, and ALL because of the amazing and theatrical students we have at DC. My bow goes to each and every one of you.

You can also follow our blog for updates on the Theatre events happening at DC here: http://blogs.discovery.edu.hk/drama/