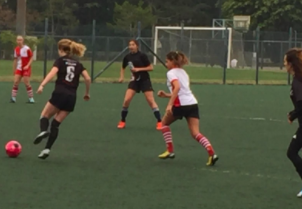 The Girls Under 20 Junior Team played Renaissance College on Monday 12 February. The Cobras were narrowly beaten 1-0 in a close fought game. The girls showed a huge improvement in their teamwork and were using space effectively and continually put the other team under pressure by taking shots at goal. A special mention goes to Lea Jakimicova as she controlled the mid-field and fed the forward some great balls on attack. Siosi Tameifuna worked tirelessly defending and passing some great balls on attack. Bella Crisini made some blistering runs on attack and the opposition found it hard to keep up with her speed and dribbling skills and Mathilde Faipoux was strong in defence.