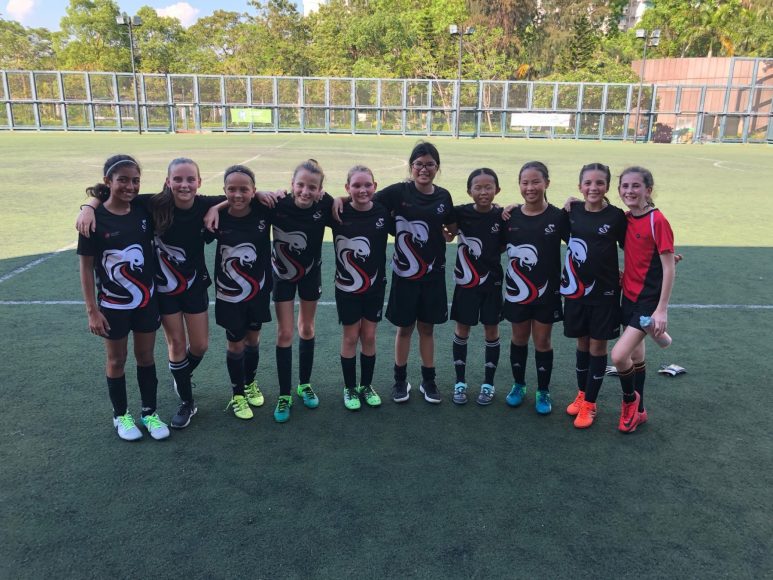 U12 Boys B Football
DC (2) Harrow (1)
On a sweltering day in Tung Chung, DC faced off against a well-drilled, well-represented Harrow team and did themselves proud. With many of the players missing due to other school commitments, DC were unable to field any substitutes and each player had to stay on the pitch for the entire game. DC took an early lead, with Daniel Fong curling a long range shot beyond the despairing dive of the Harrow keeper. From then on though, DC were on the back foot as chance after chance went begging for Harrow. The coach encouraged them from the sidelines, reassuring them that one shot would eventually go in but DC remained resolute. Late in the first half, a speculative long ball from Harrow fell between the defence and goalkeeper and with nobody willing to claim the ball, the Harrow striker poked a simple shot into the net. The second half was a struggle. Heat and exhaustion took their toll and DC wilted as Harrow rotated their players to keep them fresh. A draw looked likely until a calamitous refereeing mistake led to a DC goal. An attempted clearance by the Harrow goalkeeper hit the raised arms of a DC striker and rebounded to Sean Tsoi, standing a metre or two away from the goal. He kept his cool and tapped it in, leaving the Harrow team distraught at the injustice. The game ended a minute or so later and DC got the victory their teamwork deserved. It was a great performance, considering the conditions, with enormous commitment and great team play on show for only the second or third time this season.

U12 Girls A Football
DC (1) CDNIS (3)
Last Wednesday 23 May the girls played against CDNIS in what was to prove a crucial game to see who qualified of the finals. Unfortunately we were beaten 3-1. In the 1st half the 2 teams were evenly matched and either team could found themselves ahead at half time but it was 1-1. At the start of the 2nd half DC created a great chance to take the lead but their goalkeeper made a superb save in the boot corner to deny us. CDNIS then scored 2 goals from long throws into the box that caused confusion amongst our defence. The DC girls didn’t have their usual levels of energy after a lot of them had been out on a trip in the heat during the day. Overall they have period very well all season and were very unlucky to not have got more rewards for their efforts.

Our young team played well on Friday 25 May but the huge gap in experience showed as Chinese International School took home the victory.

U12 Girls Football Team A hosted the unbeaten HKIS Tigers at Man Tung Road Park in scorching heat on Tuesday 29 May and were impressive in their loss. It was essentially a dead rubber but the girls were out to give a strong finish to their season. HKIS started brightly and controlled most of the possession in the early stages of the game. The Tigers scored 2 quick goals and had a comfortable lead until Gioia Mirus’s long range screamer cut the lead in half. Just before half time though, HKIS scored a controversial goal to restore their 2 goals lead. The striker seemed to have handled the ball before slotting it home but the referee’s view seem to be obstructed. DC Cobras composed themselves and came out strong with Rosie Chen, Lisa Trimingham and Georgiana Smith combining for some good passing in the final third, and Nina Michishita and Ava Mckee making numerous tackles and blocks to keep the score at 3-1. Unfortunately a goalmouth scramble from a corner saw DC Cobras conceding again with little time to play. Lisa Trimingham pulled one back via a converted penalty after the HKIS defender handled the ball in the box, but time ran out for the Cobras unfortunately. DC Cobras have to be proud of their performance against a team which has conceded only 1 goal all season with clear physical advantage and can build on this experience for next year. 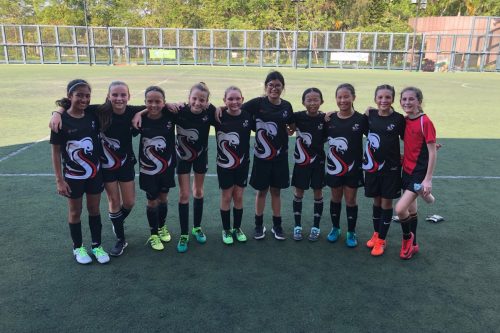 The team had a good day out in the warm conditions up at King’s Park on Wednesday 30 May. This was the first team effort against other schools as the Kowloon Cricket Tournament was canceled due to high temperatures. Excellent work in the field was backed up with good efforts batting. A few misguided bowls cost the team 3 points for each wide or no ball but all players can be commended for developing throughout the tournament. Plate Runners up was a good effort for this team.

Ultimate Frisbee
DC (5) HKA (6)
It was a great match on Thursday 31 May. Despite the sweltering conditions, the team played really well! They were up 5-3 but HKA rallied and came back to 5-5. At this stage, we had a sudden death point and our team was very close to the end zone but HKA managed to take the disc back and run up for a great catch. We lost 6-5.