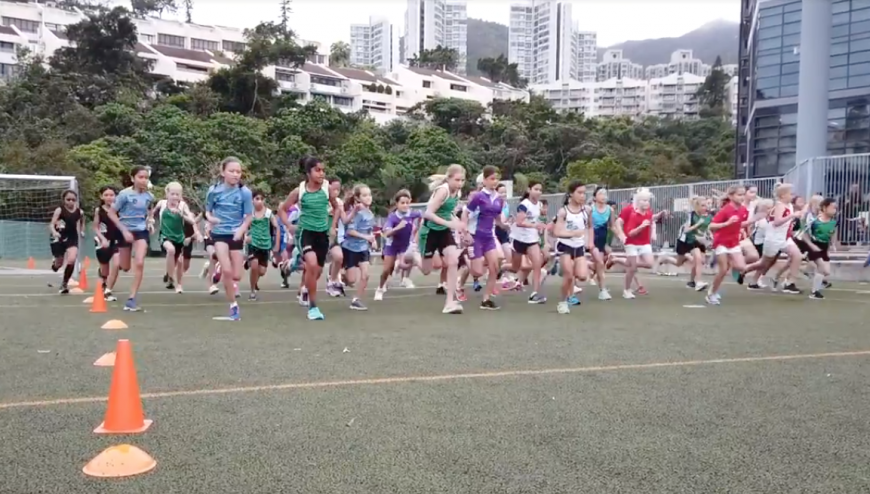 Last Saturday 23 March 2019 saw the cream of Hong Kong primary school athletes flock to DC for the 2019 Hong Kong Primary School Sports Association Cross Country Championships. Over 560 runners from 18 different schools gathered to compete over distances ranging from 1.6km for the U8s up to a little over 3km for the U11s & U12s. With each school limited to a team of five runners in each age category, the event showcased the top talent in primary school endurance running, over a thrilling course that involved the DC foreshore, the Siena Club Waterfront and Siena Park.

Despite some early morning rain, which briefly delayed the start of the event and added a few slippery patches to the course, the participants were cheered on by large crowds of family members and teachers and supported by a host of coaches and PE staff, many of whom spent the morning acting as marshals around the course. DC students were well represented with full teams entered into both the boys and girls races in all age groups, hoping to continue an excellent run of form from the recent HKPSSA Kowloon championship, built on regular twice-weekly training sessions to build speed and endurance.

The hard work paid off, with team victories in both the U8 girls and boys races as well as an overall team win in the U9 boys. In addition, the DC teams took second place in the U10 & U11 girls races, and third spot in the U9 girls. Despite being pushed all the way by some solid performances by both Kellett School and German Swiss International School, DC was crowned Champions of the overall competition once again.

Superb individual performances were led by Christina Warwick with a solo victory in the U8 girls race, going one better than her runner up result in the Kowloon Championship when she was just pipped on the line. Also on the podium were Alessia Smith (2nd U9 girls), Kaydn Park (2nd, U9 boys), Mathias Jacobsen (3rd, U9 boys), Nathan Parkin (2nd, U11 boys), Amaya Mantel (2nd, U11 girls) and Karlee Dean (3rd, U11 girls). Finally, much of the action was captured on video by Joe Leithhead, featuring some spectacular drone footage, which can be seen HERE.