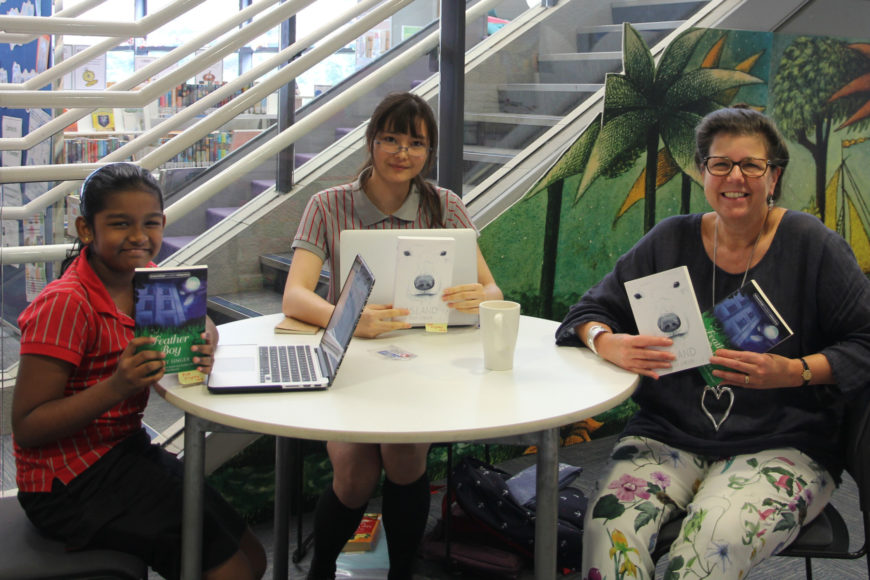 This week, Y7 and Y9 students welcomed award-winning author Nicky Singer to the school. Nicky has published a number of books for young adults including Feather Boy which won the Blue Peter Award and Carnegie Award nominated Island. Her books have been adapted for television, stage and opera and have been published in 28 languages.

Nicky shared some excellent writing advice with Y7, emphasising the importance of showing, not telling, in a story and the powerful nature of rhyme and emotion in the written word. She also stressed the important task of choosing a good name for your character.

The Y9 sessions had an emphasis on writing science fiction; this tying in with Y9s current English unit. Nicky read an extract from her science fiction work and discussed the various plot possibilities in science fiction writing. She urged the students to always think “What if…?”

Two secondary students interviewed Nicky on the day. We are very grateful to Jayaniee Saravanakugan Y7 and Hana van de Wiel Y10 for their contribution here.

What is your all-time favourite book since childhood?
It is really hard to decide actually because when you are a kid you like a different book and when you grow up you feel like you don’t like it anymore. There is one book that I really loved when I was young and I still return to it occasionally. That book is Wuthering Heights by Emily Bronte.

What was the inspiration behind your novel ‘Feather Boy’?
My inspiration… Well, I live in Brighton and when I want to think, I go for a walk. One day, on my way back home, I walked up a street and saw a huge, derelict house. I thought I’d just have a look and went in. It was really quite spooky, everything was smashed up and the paper had been ripped from the walls. I climbed the stairs and discovered four rooms at the top. Three doors were open but the fourth was shut. I opened the closed door to find… absolutely nothing.  But then I got an attack of what writer’s call ‘the what ifs?’. What if it’s not empty? What if there’s something here only I can’t see it? What if something happened in this room many years ago that still has ramifications today? The room had weird duck wallpaper, which made me realise it had been a child’s room since no adult would have chosen to sleep in a room with two thousand ducks. And the window was smashed in the perfect shape of a star. I wondered… What came in through that star shaped gap? Or what went out? So I wrote a story to answer that question.

Which of your characters do you identify the most with and why?
In order to write, you have to identify with all of them. That is what writing is, inhabiting the shoes of someone who is not you. Even if you do not like them or they are behaving badly, you have to be able to feel the feelings they have and think the thoughts they have. There is no one in my books who represents ‘me’, they just represent themselves. I love all my characters, even the bad ones.

Do you have trouble writing for different age groups?
No, I never ever ever think about the audience when I am writing. I never think I am writing for children so I will have to simplify things or talk down to them. I just write the story. Some stories are just more interesting for adults and vice versa.

What is it like being a dramatist, on top of having a career as a novelist?
When you are a novelist….you put in all the characters, the setting, the descriptions. You could have a thousand characters or you could have seventeen. Everything is up to you. And after you finish writing something, it still exists, it is still there. But with drama, you have to work with many different people. Sometimes you’ll think; “That’s brilliant! Amazing!” but in other instances it is not quite what you had in mind. But on the other hand, it is incredible fun being in a theatre. As a novelist, it is just you and the desk along with seven hours of silence every day. Whereas in the theatre, the director and actors, all creative people, are concentrating on what you have written. It is an absolutely exhilarating feeling.